Before you die, live

Before you die, live.

You are the last survivor of an alien invasion that has all but destroyed your homeworld. Barely escaping the atmosphere in your experimental ship, the Keravnós, you realize you don’t have enough fuel to survive.

You are going to die.

F$#! it. If this is your time, you might as well spend it doing what you do best: aerial ballet. Rain from the heavens as a bolt of lightning in one final blaze of glory.

Sounds great! Where can I get it?

Tailwind: Prologue was released exclusively in the Humble Monthly Bundle as a Humble Original in April 2016.

If you missed that bundle, you’re out of luck for now.

But there is good news!

We’re working on a larger version of the game, simply called Tailwind! We haven’t announced platforms or release date yet, but you can keep in the know by joining our mailing list.

Once upon a time, a small team of two decided they’d like to take on creating a game in one of the oldest video game genres: the space shooter. Questions came up: Why exactly are you fighting? Why did you ever lose the war when your side has such powerful ships? Where did that ammo come from?

Fueled with the passion of blowing up worlds with the wake of a tiny spaceship, we set out to create Tailwind: Prologue exclusively for Humble Monthly as a Humble Original.

The whole process was daunting. We started with 1 little promo graphic. This graphic was our touchstone for the whole creation experience. We also wanted to create a story, unlike any Cipher Prime game to date.

This was a process of self-growth and discovery, and we’re unbelievable happy and proud of the experience. 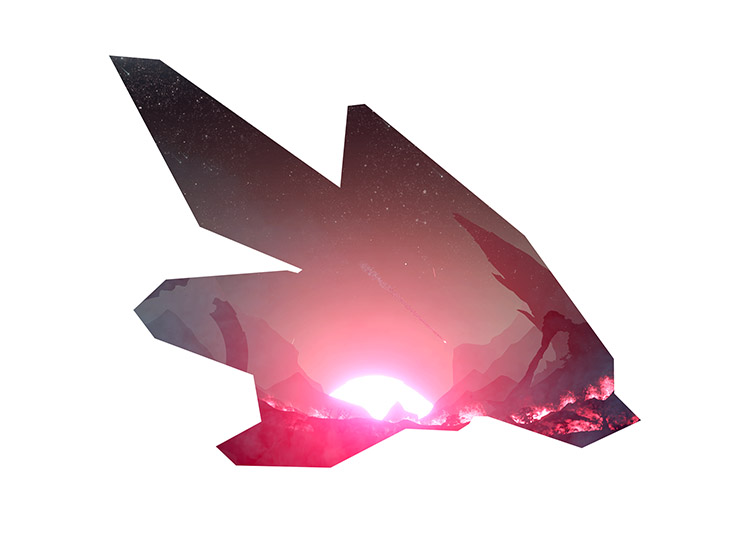 Most bullet hell games are focused on tight, pixel-precise movements — finding safe areas on the screen and only deviating from them when absolutely necessary. In Tailwind, we wanted to focus on the beauty of movement, a philosophy we call “aerial ballet.”

In Tailwind you are not the aggressor: the stage has been set against you. You must destroy by placing yourself in harms way. You don’t have unlimited ammo or some big gun, you’ve got guts and a nice piece of destructive wake.

The ship design and movement is inspired by the Itano Circus, an animation flourish made famous in anime like Macross — fighter pilots dancing through the air, narrowly avoiding huge barrages of missiles.

The music was inspired by epic poems that recall famous last stands throughout history. Specifically, the poem that had the most influence was Lord Macaulay’s “Horatius at the Bridge,” containing this stanza:

And how can man die better
Than facing fearful odds
For the ashes of his fathers
And the temples of his gods?

Visually, we took inspiration from the promotional art of our contemporary indie game designers. No Man’s Sky, Mirror Moon, and Firewatch all served as references to bring the classic Cipher Prime style to a new, lived-in world. We wanted to pay homage to the look of these games while bringing something new.

“Just installed an played - F#$%, that is some awesome exclusive game.”